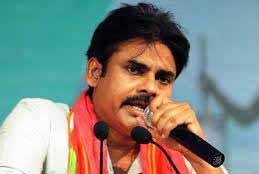 Amaravati, Aug.24 (Maxim News): Janasena Party president Pawan Kalyan has made it clear that construction of Andhra Pradesh Capital city must be taken up only in Amaravati and warned that the very presence of Telugu people would be in jeopardy if the capital city was changed whenever the governments are replaced. This was not the problem of the 28,000 farmers, who gave their lands for the purpose of the capital city, it was the issue of the people of the State, he said.

The farmers from Amaravati, who visited the Janasena Party office in Hyderabad on Saturday met Pawan Kalyan and expressed their grievances to him. They told him that the Government has not given the lease amount scheduled for this year as per the agreement and the announcements by ministers and ruling party leaders were causing a concern.

Speaking on the occasion, Pawan Kalyan said “the new Government should implement the decisions taken by the previous Government. It could correct if there are any irregularities in the system otherwise people will lost faith in the Government and its policies if it continues to change the Capital city.

Once power is given to some persons or party their decisions are ultimate and the people are subjected to confine to them whether it is State division or demonetization. There is no other way. Once the previous government had taken a decision to build the Capital city in Amaravati and passed the Bill in the Assembly accordingly, everyone should abide by it whether it is good or bad.”

Its people’s money spent on development

Pawan Kalyan observed that the ministers and the people’s representatives should not make such announcements to create confusion among the farmers. ”

They deprived us Capital City and now they are saying Capital city is not in Amaravati somewhere else. Now our existence became a question. People including me don’t know what development is going on in Amaravati. Everyone shall know what has been done in Amaravati. Now the capital city is changed what about the money so far spent on the project as it is the people’s money, not the ministers and chief minister’s money,” he questioned.

He said he would tour in the Capital city area on August 30 and 31 to know what development had taken place and inform the same to the people.

He made it clear that the Janasena Party would extend its solidarity to the agitating farmers who had given their lands for Capital city. The farmers have sacrificed their agriculture land which was yielding three crops a year and his party would not keep silent when their sacrifices were being diluted.

Earlier, the Amaravati farmers who met Pawan Kalyan explained their plight. “We have voluntarily given the lands in 29 villages for Amaravati and more than 28,000 families are dependent on the fertile agriculture lands.

The construction of most of the structures is completed except the bunglows of Chief Minister and Governor and Assembly. The developmental works came to a halt after new government has taken the reins and annual lease amounts have not been released this year. The statements by Minister Botsa Satyanarayana stating that it is in the limits of flood-prone area are causing great concern and badly affecting our interests,” they said.

There were no instances where Kondaveeti Vagu is flooded with waters after 1903 and it never received 16,000 cusecs of water and the National Green Tribunal was also acknowledged it. The flood water reached island areas because deliberate storage of water in Krishna river more than its capacity.

There was no flood water in any one of the 29 villages of the Capital City, they said and added that every farmer were in deep concern over changing of capital city. If it continues to alter the decisions of the previous government people would lose faith in the government and its democratic system, they observed.

The Amaravati farmers further said they have given their lands for the future of the State, not for any one political party. Moreover, the farmers were not belonged to one community as there were 11 communities who lost their lands for the sake of Capital City. “Sri Pawan Kalyan who is popularly known as a leader of masses and hence we need his support. We are with him and request him to tour Amaravati area and do justice to our cause,” they added.